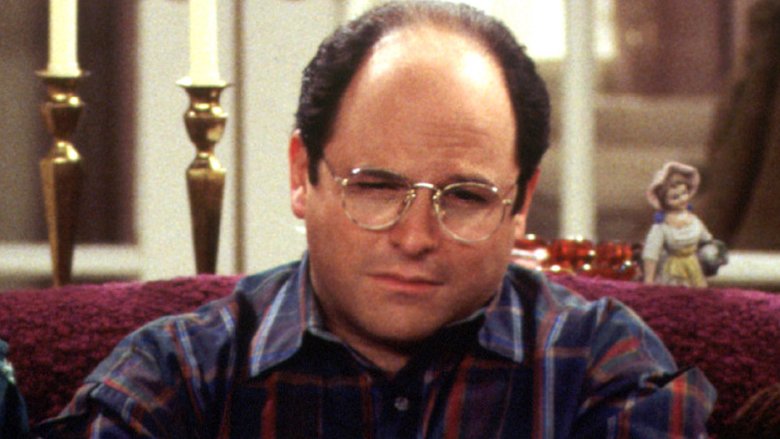 Through the swinging turnstiles of the 8th street R train station, two middle-aged men who had just turned 29 passed through.

"So you're going to break up with her?", asked John.

"Yeah. I'm just not feeling it," said George. "There's that way she licks her gums while eating. There's just no chemistry between us. That spark, that spark that's supposed to be there. It's just not there with us, you know. I deserve to be happy, and I don't think it's fair, to either of us, to continue a sham if it's not going anywhere."

"Plus.." he continued. "Not that a man such as me would notice or complain, but have you noticed that her breasts just aren't very... up to standard, so to speak? They're sub-par boobs, am I right? Not that it's important to me."

"Oh yeah I'm sure it's the spark that's missing."

"Besides," George hesitated. "There was an incident."

"I ran into another woman," said George with a bit of shame in his voice.

"Another woman? What other woman? How many women do you even meet?" John was becoming more and more amused as the conversation continued.

"Well we didn't really meet," George tepidly said. "I ran into Rachel while --"

"No, noo, not dating. I accidentally... bumped into her in the bathroom while she was in the shower."

"What do you mean bumped? You don't bump into people while they're in the shower. You ram in, you barge in, you kook"

"Yeah, yeahh whatever. Anyway while I was there... I lingered a bit"

"What?," said John who was clearly enjoying the moment. "She smiled back? What do you think that means, that she wants to have sex with you?"

"Well I don't know!," George said defensively. "It's definitely not normal. You don't smile at people when they bump-- barge into the bathroom while you're in the shower. I can tell you that for sure."

"I don't know George, I'm pretty sure this is the sort of thing that sends you to hell," joked John. "I'm pretty sure you're breaking at least a few Commandments here. I don't think it will look that good on your record when you're standing in front of the Almighty, and your record isn't spotless as it is."

"Yeah yeah, whatever, I'm Jewish. The worst they can do is send me to nothingness or whatever. Anyway, I think I'm going to call her up after I break up with Stella."

Upon leaving the subway station they strode down the street to Ricky's Halloween store on the corner of E 10th Street and University Place.

"What are we doing here" asked George, as he checked out a strange chicken costume on the circular rack.

"We gotta go to that Halloween party Darlene is arranging."

"You know I hate her Halloween parties," George quickly retorted. "You're forced to get all dressed up and throw twenty bucks of your own money away. For what? So you can dress up and enter her dumb home, with other people dressed as some dumb current cultural reference or dumb joke. There's not even good food there. It's crazy. Here we have Halloween, which when you're a kid was THE day to let your inhibitions loose and eat whatever candy you want. It was the best. When we were kids, you ate whatever you wanted, no one could tell you otherwise. Not even your parents! Now you gotta eat some kind of dumb zucchini appetizer (!) and carrots with dip. It's crazy I tell you. You know, it's against the holiday spirit is what it is."

"Yeah, yeah. Woe for George, what else is new." John was intently looking at a packaged Daredevil costume.

"Hmm, what do you think. You think this is an an adult-sized Daredevil costume?", John said. "You think I could fit into it?"

"What, are you kidding me? Even 20 years ago you couldn't fit into that. What, do you got some kind of superpower that lets you shrink your body? Have you just been hiding some superpower from me and been going out at night, running around in a tiny body, crawling through keyholes, getting up to some shit. The mighty Antman, terrorizer of New York's dirty underbelly, John Stanza."

"What are you talking about, everybody knows! It's strange that you don't know. You're the one who's strange!"

"Alright, yeah sure, whatever."

They perused the costumes for about half an hour.

"Hey look at this," said John. He held up a gaudy sequined red cocktail dress with a blue and purple shawl attached. Across the chest ran a sash: 'Call me Caitlyn'.

"Maybe you should wear this," joked John.

"Oh put that down. You've been acting ridiculously lately, I don't know what's gotten into you. There's no way I'd wear that"

"Okay, okay! It was just a joke. I didn't know you would get offended by it. I'm actually surprised, in a good way, that you would be offended."

"No it's not that. How could I go out dressed like that. Do you see overweight, bald men wearing skimpy nurse costumes on Halloween? It's distasteful. No one wants to see my fat hairy chest on Halloween."

"That would make it so much funnier. Darlene would freak. You probably could get yourself kicked out, and then go trick or treating with kids like you wanted," he said in his constantly sarcastic tone.

"There is no way I'm wearing that. There is nothing anyone in the whole world past, present, or future could offer me that would persuade me to put that on. I would rather die, I would rather... eat a bowl of goat testicles... Where would I even put put my wallet," George continued louder and louder, getting absorbed in own nightmare. "Who would wear that? It's so impractical. I'm not holding loose cash on Halloween. You know I hate not having a place to put my wallet. I lost 50 dollars before because of that, you know that. And I don't appreciate the tone you're giving me right now, I'll tell you that much. I didn't want to go trick-or-treating with the kids, I just think that the spirit of Halloween demands self-indulgence, like how as kids we got to eat as much candy as we wanted. What am I saying, you wouldn't understand!" he said, throwing his hands up.

"In fact, I'm not getting anything. It's too much money. I hate Halloween. I'm not going to go as anything, let's go," George said in a huff.

John bought a pair of fake glasses to finish a Dilbert costume he had already planned to wear and the two left down the block.

The two saw a pair of the most amazing breasts either of them had ever seen, and then a familiar face.

"Stella? Oh my god Stella," George said, as he went in for a hug and a peck. "It's so good to see you. What's it been like a month? How was your trip?"

"Good, good. How are you doing John?"

"Good," John responded, amused by the situation. "How about you?"

"Can't complain," she said and turned back to George. "It's so funny bumping into you like this."

"See, this is a real 'bump into'. Sometimes people say they bumped into someone, when really they ran into, or startled," said John with a smile giving George a snide glance.

"What's he talking about?," said Stella.

"Oh, nothing. He's been talking nonsense all day, don't pay attention to him. Anyway, what's up with you? Anything new?"

"Well... Notice anything different", Stella said with a laugh and a smile.

George put on an act and scratched his head, "Did you do your hair differently? It seems a little more straight."

"Oh come on, how do you like these?," as she motioned to her chest. "I got them last weekend, I wanted to surprise you.

"Oh you don't say? You know you really didn't have to. I thought you were perfect just the way you were, really."

"Oh please. Would you want me to change them back," she said, rolling her eyes.

"Oh no, no need to do that. It's medically very risky. I had a friend who did that, and it did not turn out well, bacteria and whatnot, very risky procedure. No you should keep them. You know what, I would say now they're great. I would even say you're even more perfect than before."

Stella's phone rang. "Oh sorry, I gotta take this. I'll be right back, you gotta feel them. They're incredible"

As soon as she was out of earshot George rushed to John. "Look you can't tell her! You can't tell her anything. Nothing about her sister. The whole things off. I'm calling it off, you hear me. You can't mention it. I'll do whatever you want."

"Oh?" Said John with a devious smile on his face. "I think I have the perfect Halloween costume for you."